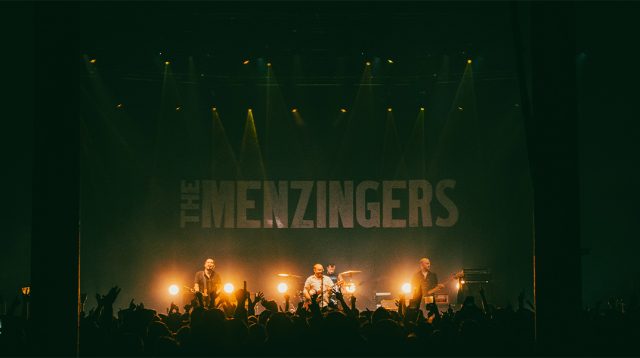 Overall Score: 9/10 Supporting acts : 5/10 Album Variety: 10/10 Venue : 7/10 Pros: High energy, non stop bangers, perfect sound from The Menzingers and Joyce Manor Cons: It felt like it was all over far too quickly

There are a lot of great ways to spend a Saturday evening in London. A concert featuring The Menzingers, Joyce Manor and Sincere Engineer was up there with the absolute best. Hailing from Scranton Pennsylvania, punk Rock band The Menzingers have a stunning discography of story rich tracks that truly deserve to be heard by the biggest audiences.

Opening up the evening came four piece Chicago pop-punk band Sincere Engineer. The female fronted band brought a huge level of angst to their music, contrasted by a charming awkward on stage nature. As their short and sweet set went on, the nerves and anxiety seemed to melt away. With frequent interactions and banter with the crowd the band seem much more comfortable on stage.

Although I really enjoyed checking out their music before hand, it was really difficult to fully enjoy their set. With instrumentals and vocals that just sounded muffled and blurred, it was disappointing to not get to experience the full extent of the talent this band clearly have to offer.

Joyce Manor came next; from start to finish had the crowd in a choke hold of excitement and adoration (Myself included.) Experiencing live music for bands you love is an incredible experience in itself. Getting to see a band live for the first time is on another level, one that Joyce Manor completely exceeded.

Opening with NBTSA there was a high energy from the get go. With a slick stage entrance and diving right in to it, you instantly knew this set was going to be a lot of fun. Going into Derailed, we were given a more bouncy track to really get the crowd going for non stop bangers. What hugely stands out about Joyce Manor is just how flawless they sound live. The standard of their performance is so high, if you were just listening and not watching you could easily be tricked into thinking it was a studio recording. Eighteen, Christmas Card, and Heart Tattoo all stood out as strong favourites. With infectious instrumentals and lyrics to match, theres not much more you can ask for from a band.

Constant Headache as one of arguably one of the most popular songs is the track that initially got me hooked after first being introduced. Hearing that distinctive guitar riff live felt so good it was almost like therapy. It’s one that you find yourself humming for days on end after hearing. Building up to and incredible guitar solo that has such an old school rock vibe about it, theres literally nothing to find wrong with this track.

Coming on stage, headliners The Menzingers met an enormous cheer. With a single spotlight shining down on guitarist and vocalist Greg Barnett, their set was ready to go. Good Things started things with a spine tingling acoustic intro before getting too full on guitar riffs. I don’t Wanna Be An Asshole Anymore offered a bouncy moment and incredibly fun track to sing along to. Hearing The Roundhouse all chant along was one of those moments that instantly gets solidified in your memories.

This massive setlist delivered a great range of tracks from each album, there was a hit to make everyone fan girl from hearing the first note. Burn After Writing was a track that hearing it live brought a whole new lease of life into it for me and pushed it up as one of my new favourites.

The Obituaries helped in delivering an extra injection of energy as the set went on. It’s another banger thats a lot of fun to sing along too. Filled with excellent guitar riffs throughout, this track was easily another highlight of the show. Announcing Casey, a track they hadn’t played in such a long time and had almost forgotten about brought an enormous cheer showing its clearly a fan favourite. Throughout the evening, it was hard keeping a huge grin off my face, fully indulging in the set it felt like a much needed boost, and a desperation for the bands to come quickly back to the UK.

When seeing a band you’ve not long got into, theres always a slight worry you might not hear tracks that got you hooked. The Menzingers did not fail to deliver on this front. America (You’re Freaking Me Out) was one of the first tracks that had me interested in Scrantons finest, and one I knew I had to hear live. With that first guitar intro starting, i couldn’t wait to sing along to the chorus surrounded by other fans and in such a cool venue.

The Menzingers feels nostalgic, and cathartic, all while maintaining its punchy nature. Anna was another track that after hearing it live, I fell further in love with it. The lyrics flow so effortlessly along with its backing music its like a massage for your ears. It’s hard to pin point exactly what it is, but The Menzingers have such a way with the crowd that just adds to the entire experience.

Other tracks which filled the room with perfect sound included, Tellin’ Lies and Thick As Thieves. Last To Know was another phenomenal stand out track. Having a different sound to the more pop-punk and jump around moments of the set, this felt like such a refreshing few minutes. With moments of total silence for the bands performance and talents to really be appreciated, the fuzzy guitar riffs of this track are ones that yet again you end up addictively humming at random intervals for so long after.

As if the main set wasn’t perfect enough, the band returned to the stage for an encore of three bangers. Opening the encore with Lookers, the constant grin I had all evening grew even bigger, one of the few tracks that initially got me into the band and has found and special memories attached it was a perfect way to draw the night to a close. Followed by Ava House, and After The Party this was truly an evening celebrating everything great about The Menzingers timeless story telling tunes.