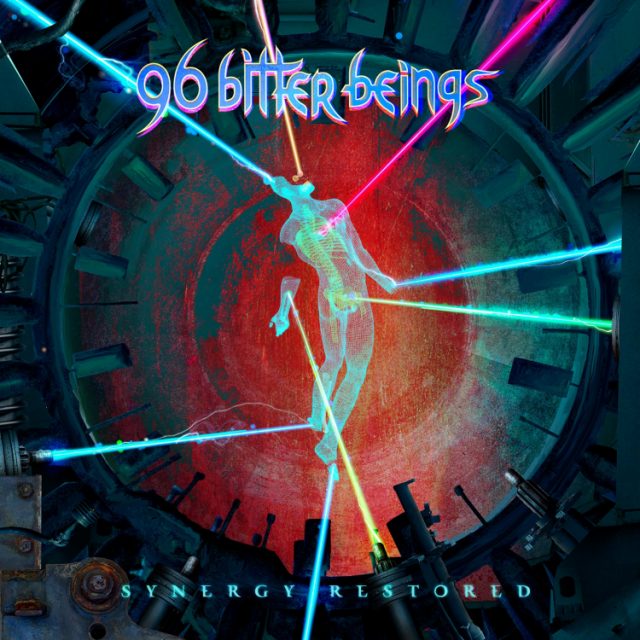 For a generation that grew up with wallet chains and baggy jeans, the name 96 BITTER BEINGS will immediately strike a nostalgic chord. An integral part of the soundtrack to many a misspent youth watching Bam Margera and Johnny Knoxville on MTV, the hit single 96 Quite Bitter Beings rocketed frontman Deron Miller‘s previous band, CKY to stardom two decades ago. The track would take them from the Pennsylvania underground to riding shotgun on tour alongside the likes of CLUTCH, METALLICA and GUNS N’ ROSES, almost overnight.

After ten years of destruction on the road, Miller departed CKY in 2011. Taking a brief break from music, before going on to form 96 BITTER BEINGS with Kenneth Hunter and brothers Shaun and Tim Luera. Having worked with all three previously in his side project, FOREIGN OBJECTS, chemistry came easily to the group.

Born from the early writing sessions of 2018’s Camp Pain, Synergy Restored has been a little longer in the making. Although with Miller‘s penchant for riff heavy rock and roll, as well as the same all killer no filler mentality to songwriting that gave us Camp Pain, 96 BITTER BEINGS‘ newest release should definitely conjure up the same warm memories of Infiltrate.Destroy.Rebuild (2002) as its predecessor. As well as hopefully blazing a few new trails along the way.

The album’s first track, Vaudevilles Revenge has Deron Miller‘s fingerprints all over it. From the creepy reversed carnival ride intro, to the stomping chorus riff, he seems to have picked up exactly where he left off with CKY during their Carver City (2009) era. Giving the album a great starting point for both old and new fans alike.

Follow up track, Wish Me Dead should be familiar ground for cKy fans too. With a multi-octave groove that harks back to some of Miller’s earliest work. However it’s not long afterwards, during Fire Skyline that something begins to sound slightly off. Namely Miller’s vocal tracks, neither of which seems to be on key. They aren’t out by much, but it’s just enough to distract the ear, especially during the song’s chorus. Which is a shame, as lyrically it’s one of the albums stronger tracks.

Thankfully the issue is much less noticeable during Throw Yourself Inside and is virtually non-existent during 90 Car Pile Up. With the latter of which proving to be one of Synergy Restored’s standout moments. Thanks largely to a chunky verse riff and some tasty lead guitar work from Miller and Kenneth Hunter. Given that almost every song has at least two vocal tracks however, it’s hard to see why Miller’s lower vocals weren’t bumped up slightly in the mix. As the problem is definitely most noticeable when he’s up at the higher end of his range.

Contrasting the darker tone of it’s counterparts, Bedtime Story is another track that really stands out. With a more upbeat sound and horror inspired lyrics that make it eerily reminiscent of early cKy tracks like Escape From Hellview. It features one of the album’s more memorable chorus lines too, making it a sure fire crowd pleaser if it finds its way onto 96BB’s future live setlists.

Frustratingly, the same issues that robbed some of Synergy Restored’s earlier songs of their impact rear their head again towards the end of the album. With Miller’s vocals on Adios Amigo in particular failing to find their rightful place in the mix. Closing track, Conditioned or Unconditional goes some way towards rescuing things. Providing a solid end to proceedings and leaving the listener on a high, but unfortunately it’s almost a case of too little, too late.

There’s a lot to like about Synergy Restored and no doubt it will give diehard cKy fans a good hit of nostalgia for their trouble. Despite being packed with groovy riff’s and some impressive instrumental performances though, it unfortunately fails to hit the same highs as Miller’s previous efforts.

For those that are able to keep their rose tinted glasses in place, the questionable vocal production may not amount to much. However, it’s just enough to bring down an otherwise solid album. Meaning that despite hitting all the right sentimental buttons, Synergy Restored falls just short of greatness in spite of itself.