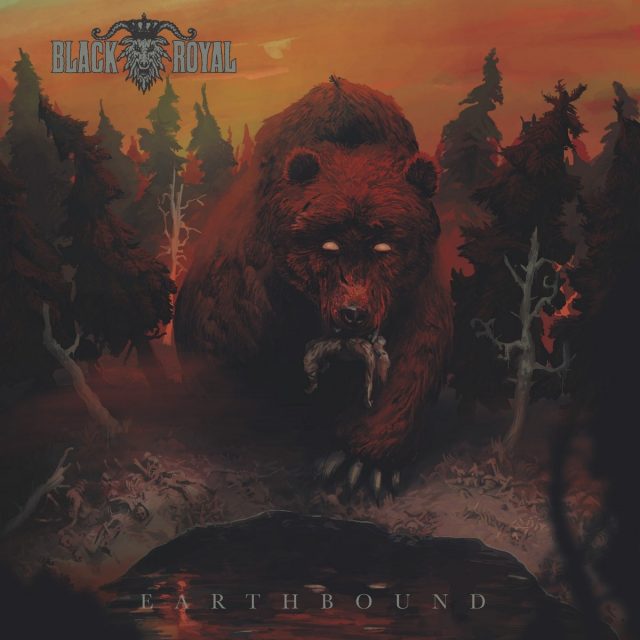 Earthbound is the third album from Finnish death metal mavericks, BLACK ROYAL, and their first since 2020’s excellent Firebride. If you missed it, Firebride was one of the extreme metal albums of that year, not least because of the impressive amount of passion and detail that went into the lyrics. Firebride’s songs were stories chiefly concerned with opposition to early Christianity, viewed through a pagan lens, especially highlighting the oppression of women. If the key themes of that album were persecution and suppression, then Earthbound’s are more upbeat, being a raucous celebration of pre-Christian faiths, myths and beliefs.

It begins with the title track, and a key component of pagan belief – man’s place as part of nature. Here a happy corpse returns to Mother Earth “Entombed, shallow grave, I am home, earthbound” There are clean, stately guitar lines, as befits a good send off, but it’s all underpinned by slow and sludgy death metal.

One of the major touchstones on the previous album was Behemoth, not just for their shared in-depth immersion in anti-Christian lore, but their crushing blackened death metal and lead singer Riku’s flamethrower bellow, being quite similar in style to Nergal. However, whilst Riku remains on fearsome top form throughout, the band I most often think of when listening to Earthbound is Iron Maiden. BLACK ROYAL’s excellent use of keys add a fulsome, proggy, drama to the songs, bringing a touch of theatre to proceedings without ever descending into camp pomposity. Conjuration is a good example of this new found direction, as it features juddering, Gojira-style death metal, mixed with epic sounding Powerslave-esque keys. And it’s not just the keys that recall Iron Maiden – Ghosts of the Dead features swashbuckling soloing and grandiose synths amidst the sludgy bellowing in the animated, charging verses.

The album really hits its stride in the three song barrage of Law of Nature, 13th Moon and Phoenix Rising. Law of Nature has the greatest, hookiest chorus of the album, with hammered piano and more classic soloing under a very sturdy riff, it calls to mind Kvelertak’s eccentric, metal magpie genius. As does 13th Moon, which features a blackened death intro a la Celtic Frost before switching to filthy rock ‘n’ roll and there’s even slide guitar. FFS! Phoenix Rising is more pure heavy metal over Jukka’s martial beats and sounds like the call to arms of a great heathen army. With another huge chorus and massed wordless vocals adding a hymn-like quality, it’s another absolute banger from Black Royal, who are amassing quite an arsenal of potential arena bothering anthems. In fact, it’s a mystery to me why this band aren’t playing to rooms that size, instead of novelty acts like Amon Amarth.

Anyway, sexy doom metal, anyone? Proving that four hairy Finnish blokes singing about paganism can be a thrusting good time is “Queen of the Underworld” which crushes you with its riffs whilst tickling you in the front pocket. They really do love their queen – “Hail! We serenade, the Queen of the Underworld” they shout amidst psychedelic guitar leads and more heroic riffola. Try not to punch the air.

I don’t know who the Queen of the Underworld is, but I do now know about bear worship, thanks to the excellently titled Bear Cult. That’s the thing about Black Royal songs, they are very approachable and intriguing and I have found myself investigating the themes on many of their songs. The tune itself stomps and prowls like a hungry grizzly, just as you’d hope.
In truth there are a few tunes towards the end of the album that have yet to make the mark sonically and thus I haven’t fully explored their meanings. So as of yet I don’t think Earthbound is quite as strong an album as Firebride, but that isn’t to say that it isn’t one of the finest, funnest forty six minutes of heavy metal heaven you’ll experience this year. All hail Black Royal!