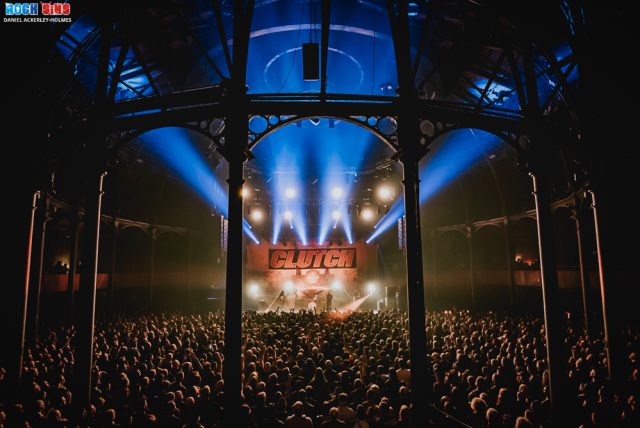 When people talk about the most consistently brilliant artists in rock music history, the biggest cult bands and the best live acts of the last 30 years, Clutch will always be an answer. Doing nothing but exactly what they wanted to do since their debut album released in 1993, their 13th studio album threw a curveball at one of the sturdiest four-pieces to ever plug into amps. Sunrise on Slaughter Beach would become just another example that you cannot change Clutch, even by taking away the lifeblood that runs through the band’s DNA.

Clutch have always played on their jazz influences when creating new material, often playing new tracks live for months on end before their release. Crafting the song in the environment it is supposed to be heard in through little twists and tweaks, similar to a stand-up comedian working through a new bit. Guitarist Tim Sult says that though it was a different process, the band easily adapted to doing things in reverse and were still able to capture the energy they were looking for.

“We did probably play about three or four of them live regularly so you know, it wasn’t really that bad. But you know, usually, we would like to workshop every song as much as possible.”

He added: “Honestly, it really felt like we did capture a lot of the live energy of a clutch performance with the recording as a new album. To me, when I listen to it, it sounds like us in a room playing. Even though there’s a lot of guitar overdubs, I could still totally hear the liveness of the clutch performance on our new album.”

Crucially, despite a different process, the livewire element of Clutch came through on the album. Whilst some could dismiss it as another decent Clutch album full of decent Clutch songs, that’s far from the truth. Whilst the quality and content of the album isn’t going to take anybody by surprise, that’s the band’s biggest selling point. They always do themselves and they do that better than anyone else.

Sult says: “From what I have heard, it’s been relatively positive. I have no complaints about relatively positives. We’re lucky enough to have, you know, totally dedicated fans that enjoy listening to the new songs that we write. A lot of older bands can’t really find an audience with their new material, even their own fans have no interest in hearing their new material but we’re lucky to have fans that, you know, actually want to hear us create.”

In interviews before the album had been released, some members of the band had spoken about the album’s original direction going towards being a fast-paced rocker to sweep away the cobwebs of the pandemic. Sult sees it that whilst that may have been the case at some point, the album eventually became a much more diverse affair as the effects of the last several years started to wear off.

“I would say probably the first song that we wrote for the album was Strive For Excellence so that kind of leans towards the more positive, ‘be happy’ sort of vibes. But as far as you know, to me, it doesn’t really sound that dark to me personally. You know, we’ve got a lot of heavier songs on this one more on the Sabbath type vibe. I don’t know. I mean, to me it sounds positive and happy. But that’s just me.”

Despite being referred to as the greatest band you’ve never heard of, Clutch have a very diverse appeal that almost counter acts their ‘cult’ status. It’s further proof of their legacy as a band. Whether it’s on their thirteenth studio album that still manages to push their creativity or up on the stage, if they’re going to do something they’re going to do it to the best of their ability. It doesn’t matter if it’s a song about the Queen of Vampires or a festival where no other band sounds like them. Whilst they strive for excellence, other bands strive to replicate their consistency.

Tim Sult says that their diversity just comes out naturally for the four members:

“We try to make every song sound different from itself, that’s really the way that we’re looking for diversity. As far as festivals go it is pretty awesome that we get to play different genre festivals like, one day, we could play a Metal Fest and then the next day we can play a festival with pop bands and rappers and it’s totally fine. So that’s one of the funnest things about going on tour in Europe is getting to play all those weird diverse festivals that they don’t have as much over here in the US.”

He jokingly remarked: “I would probably say seven out of 10 of the festivals that we play, the crowds are not right for us. No, I’m just kidding. I would say in the early days, maybe it felt like that, like in the early days of festivals, we just weren’t used to playing with such a diverse palette of bands. So it just took us a few years to really get used to what’s going on over there. As far as you know, playing with Napalm Death one night and then reggae bands the next.”

“We’re a perfect cross between Napalm Death and Bob Marley and we’re fine with that.”