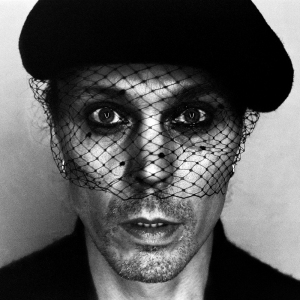 Overall Score: 8/10 Songwriting: 9/10 Musicianship: 8/10 Production: 8/10 Pros: A welcome return from the King of Love Metal. Cons: Could have had a touch more guitar riffs but this may have also detracted from VV as a separate entity.

Heartbreak ruled the roost on New Year’s Eve 2017 when gothic heart-throbs HIM disbanded in their native Helsinki. Five years later, the Heartagram beats once more as Ville Valo returns to reclaim his throne as VV. The pioneer of love metal sought to soundtrack the dreary winter days with the enchanting Neon Noir.

The first solo full-length comes with 12 tracks of delectable tales of devotion, sex, and melancholia. The single, Echolocate Your Love is the first take of this electric night and delivers that sweetness only Valo can. Bathing in the brightness of synths shimmering like moonlight on a placid lake, Valo’s trademark vocals haunt our coronation of “trauma king and queen”. From the first track, we see Neon Noir isn’t an entire separation from HIM, but rather a continuation of the bard’s 25 year tenure.

Comparisons with the Finnish band may run rife but that would be an incredible disservice to VV. While Run Away From The Sun’s theme of dwelling in soft moroseness runs rampant, the instrumentation is much softer here. Playing all the instruments himself, Valo gives himself over completely to the process which creates a dreamy atmosphere we are more than willing to spend an eternity in while he tells us “all the sweetest of lies”. The title track proves grand in many ways. Not only does it contain Valo’s first guitar solo on a record but it also houses the darker edge he has become known for. The Finn’s command of the English language is simply sublime as he captures the essence of being so devoted to someone that it hurts. This edge that can cut us shines through in the darker buzz of guitar and a wonderful scream of “come love me numb”.

Love’s scale tips towards the toxic with Loveletting. We find ourselves “chasing shadows” within lusciously gothic soundscapes Edgar Allan-Poe would be green with envy from. Valo’s fascination with loss of things that could never be is wonderfully relatable in its pain. A sensation of being out of sync with the person we love is something Loveletting orates with the greatest of ease. Following The Foreverlost is an enchanting love letter to the object of our desire. The instrumental could be construed as this sentiment having a somewhat sinister tone to it. Yet releasing any sense of foreboding allows the track to flourish as the desperate ode we had missed with the departure of HIM.

We had alluded to it previously but something which cannot be denied is the songwriting talent Valo has. It seems to flow effortlessly from mind to paper. It may breed titles such as Baby Lacrimarium but the tears this vessel captures are that of appreciation. Juxtaposition reigns supreme as jubilant and upbeat synths settle against lyrics of “celebrate the pain with me”. While VV’s “citadel of scars” is on full display with Salute The Sanguine. The sibilance on display in the title alone is wonderful on the ear. It could be argued that the album up until this point is streamlined or simpler in comparison to previous material but this track proves there is still so much to dive into. A percussion led interlude coupled with Valo’s vocals layered above it breathes so much space into the piece.

If it’s the utopia we’re looking for, we find it with In Trenodia. A catchy number which relishes in a rich and bright introduction. With the verse comes spinechilling melancholia. Branded as “a love song for the lost and lonely”, this is Valo at his finest. Talk of being high from the dying sun feeds into the supernatural which breeds Heartful Of Ghosts. By this point, we’re wondering if we can take another emotional battering but Neon Noir is an intoxicating listen which pulls us further in with each passing moment.

The closing moments of Neon Noir breeds familiarity in the most joyous of ways. The gloominess of Saturnine Saturnalia is heady as we float into possibly the heaviest track on the record. Semblances of guitar riffs ring the bell of doom metal, feeling quite Black Sabbath in tone. Could there have been a touch more guitar? Of course, but the double edge sword comes in would this have sounded like a life gone by had there been more?

By Neon Noir’s end, we find ourselves in full approval and appreciation of this incarnation of Ville Valo. The album is wonderfully hypnotic in nature. Why many had tried to fill his shoes in his absence, there is no one who can make our heartstrings tremble with a saccharine melody like Ville Valo.