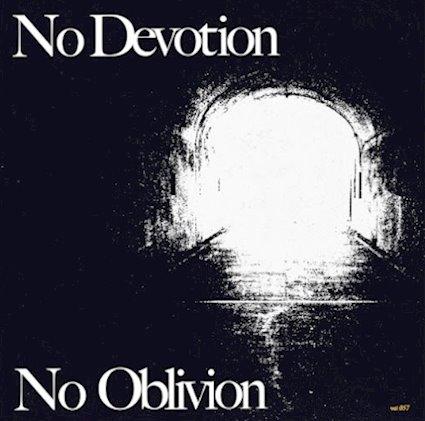 Overall Score: 8/10 songs: 9/10 replay value: 8/10 production : 8/10 Pros: A mature and reflective second album from a band who will hopefully get their time to shine Cons: After waiting for so long, it feels a little short

It’s been 7 long years since No Devotion burst onto the scene with their album Permanence. It was an assured, confident debut that should have seen the band climb to the highest highs. Sadly, as is often the case, life had other plans and everything went silent. Until now that is.

No Oblivion is the band’s long awaited second album and let me tell you now, you can feel everything the band went through to get here. If Permanence was A New Hope then this definitely The Empire Strikes Back.

Taking the sonic landscape from their debut in darker, more reflective direction this time. The synth laden pop sensibilities present throughout now have more in common with Echo and the Bunnymen and Nine Inch Nails than the sunnier outlook previously showcased. This isn’t a complete overhaul though and band we fell in love with nearly a decade earlier is still lurking beneath the surface.

Starlings comes into focus on a minimalist synth and drum pattern. It invites the listener back into this world, the sound of rain present throughout. It’s desolate and fragile, setting the vibe early, the rest of the album will follow.

A Sky Deep and Clear sounds like Nine Inch Nails at their most sparse and hopeless. With its scratching, grinding rhythms and isolated sounding vocals. This is one of Geoff Rickly’s most stirring vocals. It’s spine tingling stuff.

The End of Longing & Endless Desire are as upbeat as the album gets. Offering the listener some late game light in the darkness. The former has a pulsing synth back bone,complimented by a gorgeous guitar riff cutting throughout. The latter is a little more stark, relying on processed drums and a twinkling melody, with another sensational vocal melody, it feels cinematic, like it was made to be listened to during the end of the world.

In a Broken Land feels it was ripped from the Blade Runner soundtrack. It’s beautiful and icy, yet somehow leaves you feeling hopeful, before closing out on the sound of rain.

No Devotion have no doubt been through the ringer since their last album. All of those moments have led them to this. No Oblivion is a more desolate, painful listen then Permanence, an album that holds you in its clutches as its many moods and layers engulf you. It’s an album that many in the band’s fanbase may not be expecting. But it feels necessary.  A beautifully crafted musical bloodletting if you will.

With the collective talent involved in No Devotion, the question of quality was always going to be a non issue, but for them to create something this stirring, this emotionally resonant and dare I say it bleak, did seem out of the realms of possibility. With all of that said, this is an album that despite its more brooding tones, is just as irresistible as its older sibling, and will likely prove to be more rewarding over time. Now, if the universe could chill out, so we don’t have wait another 7 years for a new album that would be great.

No Oblivion releases on September 16th via Equal Vison.