In news long awaited by ourselves here at Rock Sins, our good friends and London’s very own sludge / doom riff masters Hang The Bastard have confirmed various details of their forthcoming brand new album. Titled Sex In The Seventh Circle, the album will be landing on the 22nd of September in the UK and Europe and on the 14th of October in North America. The album will be released by Century Media Records and Siege Of Amida Records in a continuation of the partnership between the two labels. The album has been produced by Steve Sears who has worked with Gallows amongst others at Titan Studios in London and with album art by none other than The Radio One Rock Show’s Mr Daniel P Carter, there is already a huge buzz around the album with the release more than two months away.

Hang The Bastard themselves have had this to say about Sex In The Seventh Circle:

“We are very excited to put out our new record ‘Sex In The Seventh Circle’. We have spent a lot of time writing what we believe is the album we as a band wanted to write. In a day and age where a band is scrutinized for trying to do something different, we have gone ahead and written an album that we wanted to write and we hope that people love it as much as we do. If they don’t, feel free listen to something else.”

You can see the Artwork for Sex In The Seventh Circle, as well as the full track listing below:

Hang The Bastard – Sex In The Seventh Circle Track Listing

Hang The Bastard play London’s 100 Club with Valient Thorr this coming Wednesday (16th of July 2014). Further info including any more news on Sex In The Seventh Circle will be announced here as and when we have it. In the mean time please follow Hang The Bastard on Twitter at @hangthebastard. 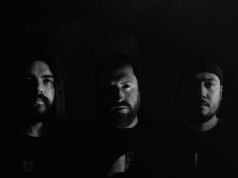