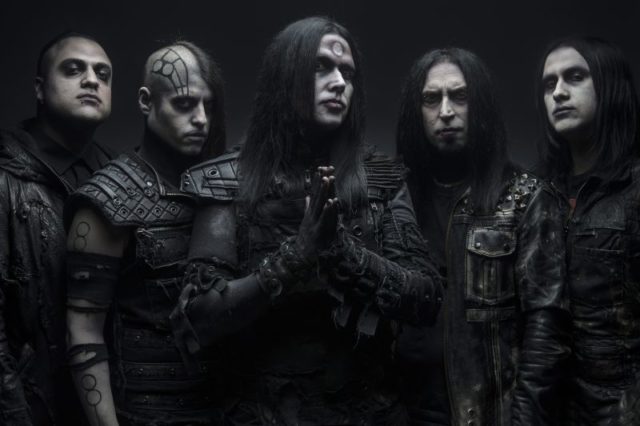 There’s a new breed of Wednesday 13 in town – a darker, heavier being that finds its roots in true crime alongside the band’s notoriously tongue-in-cheek signature. Iconic frontman Wednesday 13 speaks to Rock Sins on the finer aspects of ‘Condolences’, the drive behind his 27 years in music and what to expect from his headline set at this year’s Download Festival.

With six Wednesday 13 albums under his belt exploring musical horror in the only macabre way as he knows how, Wednesday knows a thing or two about the genre – but if new album ‘Condolences’ were a horror movie, which terrifying tale would it be?

“My old records would definitely be more of a B-movie like Night of the Living Dead, but ‘Condolences’ is such a different, darker kind of album. It’s mature compared to most of my releases so it’s more of a Stanley Kubrick like The Shining.”

Perhaps the most memorable aspect of Wednesday 13’s output is his lyrical content – punchy, contagious and always piled with menace. After all these years, how does Wednesday manage to keep up the scare factor?

“Lyrically, this record is definitely not my typical campy horror movie lyrics. This time, I wrote about serial killers and true crime stories because there are so many truly horrifying true stories out there. Condolences sounds a little scarier and darker because it’s based in fact, if I carried on singing about walking with a zombie, I’d be the dumb Weird Al guy. I like to keep it scary but I don’t think I’m shocking people, it’s hard to shock anybody these days.”

20 years down the line, Wednesday 13 is still taking himself as seriously as he possibly can. In a world of bleak news and dark futures, fans can take comfort in the knowledge that Wednesday 13’s signature comedy won’t change with it.

“I don’t try and force my sense of humour in there because it wouldn’t work, it happens naturally but it has to be in there because that’s what makes the official Wednesday 13 stamp. It’s a balance between ‘oh this is dark and creepy and weird’ and ‘oh wait, I can smile about this too.’ It’s never so serious that you can’t smile through my work, ‘Condolences’ is definitely not full of smiles but they’re hidden in there as always. The whole record is pretty close to me, it’s a lot more emotional than my previous records – the title track ‘Condolences’ is a super eery and dark song I wrote that about my own future funeral.”

“Travis is great, I had to track him down when I saw his name credited on some awesome album covers. He’s one of the most known album artists in heavy metal so I approached him saying I’ve been doing my own covers for a while – I call my own art the ‘Scooby Doo’ covers – and I needed something a little dark and less campy. He was the right guy to go to, he definitely changed it up and I love it.”

Visual differences aside, ’Condolences’ also welcomes a darker instrumental to the Wednesday ethos, a grittier metal approach than the previously reckless punk label the band were rather subconsciously given.

“I heard the term ‘horror punk’ a while back with my band Frankenstein Drag Queens from Planet 13, it wasn’t even a term back then but we’d played somewhat punk music and we had horror lyrics so we just accepted this new name. Honestly, I don’t pay attention to the labels people want to call us. As long as someone’s talking about us, I don’t really care what they call us. Whether it’s punk or metal or rock, it’s just me – if there’s a box, I’ll see my way out of it!”

Releasing this seventh album via Nuclear Blast, you’d be forgiven for thinking Wednesday 13 has taken a step back from the hectic album cycle.

“The build-up for Condolences has been amazing so far because the label has been promoting it and keeping me busy elsewhere,” Wednesday tells us. “I’ve never been this busy doing Wednesday 13 stuff before and I’ve also never spent this long recording something! I’m always putting out albums so having an army of a team behind us this time is great.”

While genres, art and labels change, Wednesday 13 remains the last man standing from the band’s first guise. That said, ‘Condolences’ has an air of completion about it, a band at peace with their style and ready to share it with their long-standing fan base. The soaring solos of axeman Roman Surman through the likes of ‘Omen Amen’ stand to prove that the current Wednesday 13 is a comfortable fit.

“This current line-up has been going for six or seven years and we’re doing great,” Wednesday beams. “I’ve been playing with Roman Surman and Jack Tankersley since the Gunfire 76 band in 2009, we’re best friends and we’ve also been playing together for so long. With ‘Condolences’, we wanted to showcase everything we’ve been doing since we met, we wanted to show people what we’re capable of. When you hear it, it sounds big and full, not just thrown together.”

Outlasting the gothic and punk waves of the 1990s, Wednesday 13 has stood the test of time, but is there an end in sight for the horror kids? Not in the slightest.

“I turned 40 last year and I’ve been in bands and putting out albums since I was 15 years old. It’s been a long time but at the same time I feel like I’ve got a long way to go so there’s no stopping me, there’s no sign of me getting bored or wanting to sit on the sidelines any time soon.”

Fifteen years since ‘Beyond the Valley of the Murderdolls’ in 2002, Wednesday’s journey into the morbid began with a tentative step into the unknown. Surrounded by bands exploring their genre’s boundaries with a varied success rate, luckily for us Wednesday’s winning formula hasn’t changed.

“When I started out, I wasn’t following anything that was going on in music whatsoever,” Wednesday admits. “Fuck anybody who says Wednesday 13 has sold out, I’ve never done that. I could’ve started writing radio songs a long time ago, I’ve been doing this for 20 years and I’ve always stuck to what I do best and I always knew I was never going to be accepted by the mainstream.”

With such an extensive back catalogue after years of relentless hard work, however, Wednesday applauds new fans who have a lot of material to take in.

“It’s awesome for me knowing there’s kids out there still listening to Murderdolls and there’s even kids out there now just discovering me this week. People listening to Condolences as their first Wednesday 13 album have years and years to catch up on, you can look back on my back catalogue and see I’ve always danced to the beat of my own drum. You have twenty albums to listen to, but that’s what’s so exciting for me about discovering a band with a huge back catalogue. I got into Alice Cooper in the late ‘80s and thought ‘this is great, but fuck he’s got like 40 albums before this!’”

With Download Festival in sight as he is due to headline the Dogtooth Stage on Saturday night, Wednesday has a few tricks up his velvet sleeves.

“Our set at Download will be the biggest production show I’ve ever tried to pull off outside of the US – I have tonnes of surprises, fire and blood! This will be my third time at Download and we’re finally playing in the dark in one of the tents, we have a 45-minute set in the night time and hopefully our giant stage production won’t get fucked up!”

Creating an entertaining and encompassing setlists can be a nightmare for a band as persistently active as Wednesday 13, but there’s no guessing what will feature in Download’s set.

“We’re just dying to play any of these new songs because we’ve had them recorded since September. For a band that tours nine months out of the year and plays these songs every day, every time we get brand new songs of ours to play live, it’s just oxygen for us.”

Horror-based bands have usually seen their fair share of sights in the crowd. Does Wednesday have any revelations over his illustrious career on stage?

“I’ve seen a lot of weird stuff! Whenever we play Halloween shows, everyone dresses up and we have a big Halloween night together. One night, this big mosh pit broke out and people were crowdsurfing and the main crowdsurfer was dressed in a Beetlejuice costume and I thought that was hilarious. I get a lot of great gifts and a lot of my fans bring me toys when they find out all the stuff I’m into. Some people assume I’m a weirdo though, some guy at a show once brought me a mummified cat. Like, ‘here you go dude, I thought you might like this.’ What the fuck was that about?”