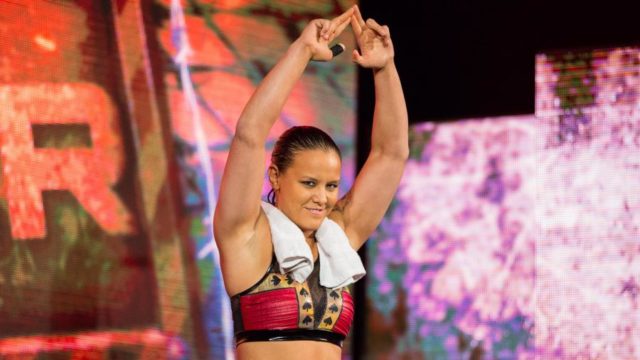 NXT not only boasts the most exciting wrestling in the world, but it also features one hell of a women’s division as well. Nxt has been producing some of the best female wrestling in recent years and continues to set the bar for everyone else. One of their most recent recruits has now become their MVP and reigning champion. The Queen of Spades herself Shayna Baszler who has transitioned from MMA to the world of NXT. We were able to chat to her at this year’s Download Festival to talk about her move from MMA to NXT, her character, music and whether or not we will see the four horsewomen of MMA ride together again in the WWE.

So this is your first time performing at Download Festival. How has the festival been treating you so far?

Shayna: Oh man, So I’ve been a big metal fan forever. I go to Knotfest and all these big rock festivals and I knew immediately that this is totally the type of thing that this crowd would be into. Coming up in mixed martial arts I always talked about how metalheads are nerds really, wrestling fans are nerds, video game fans are nerds, but I don’t mean that in a ‘Bully you’ sort of way, what I mean is that they are very into what they are into, when you get genre nerds all into together they are all about it man, so I knew it was going to be awesome.

Is it a different dynamic wrestling in front of an audience that isn’t made up of strictly wrestling fans.

Shayna: Yeah, I think you have to work a little bit to show who you are because they don’t just know, but that’s the stuff I did in MMA, so it’s not unfamiliar to me to let people know who I am. It’s also interesting because a British crowd is different to an American crowd, so that aspect has been more mind-blowing to me than the fact that it’s at a music festival and not a traditional wrestling show.

Yeah, the British wrestling fans definitely have some unique chants.

As we’ve discussed you have come from the world of MMA and the UFC. How has your transition from MMA to NXT been for you.

Shayna: It’s been smoother I think because I’m a catch wrestler, I’ve been a catch wrestler in MMA, Josh Barnett my main head coach for like 12 years he is a professional wrestler as well as a fighter. Bill Robinson would teach us for mixed martial arts as well as sports entertainment, this is what I’ve been in for a while so I think I have a leg up on people that are like ‘I fight MMA, I think I like this so I’m gonna try it’ I’ve been involved in this a lot longer than people realise as far as the training and the working for it too.

You bring a legitimacy with you when you step into the ring. People know that you have come from a real place and that you are a real fighter, not someone who has just walked in the door looking to wrestle.

Shayna: Yeah, I didn’t necessarily fight, thinking one I’m going to do professional wrestling, I always fought with the intent that that was the end goal, so when I’m behind the curtain about to go out to an NXT event that’s all I know, I’m here to fight and be the best fighter, that’s all my body knows, so it’s easy for me to show that because it’s what I’m familiar with.

You are now tasked with being the NXT Women’s Champion. How does it feel for you to have that responsibility on your shoulders so soon into your wrestling career.

Shayna: It’s easy for me to be the hardest worker in the room, I’m competitive in that aspect. I knew with the goal of having the title what I wanted that to mean, and it was the legitimacy and the old throwback to the days where people should like the champion but there’s also a side that makes people go ‘Woah, I’m not going to upset them’ and that is something that I have wanted to uphold as the champion. That is important to me and the pressure on myself to kind of bring that back to the championship.

It has definitely been reflected in your recent match on TV with Dakota Kai and now as you enter your program with Nikki Cross who is crazy, but there is absolutely no fear from you whatsoever and you can see you are as willing to give as much as you are going to get from your opponents. I think you have managed to maintain that character and keep that mystique about you.

Shayna: It’s interesting, and Nikki is more confusing than scary to me, it’s more mind-boggling, but we’ll get there.

The WWE now has all four horsewomen of MMA under their umbrella now with you, Ronda Rousey, Jessamyn Duke and Marina Shafir all under contract. Are you looking to reunite with those guys somewhere down the line and have a faction in WWE or are you just looking out for yourself right now

Shayna: It’s a little of both. I’m not going to sidetrack off of my path and the things I’m doing and what I want to accomplish, but who doesn’t want their friends with them at work every day, so it’s awesome, and it’s what we’ve done, once we were living together and training together and we clicked the four of us after the Ultimate Fighter. It’s like when Ronda was UFC Champion and Jess was in Invicta and we were all kind of doing our own thing in MMA as well as supporting so it’s kind of the same thing just on the other side of the coin.

For those people out there who have still yet to join the NXT party, how would you describe NXT in one sentence.

Shayna: In one sentence?…NXT is the most exciting brand in sports entertainment that you probably haven’t seen yet, so check it out.

Shayna: For the people who actually are my fans and have known from the start what was going to happen, keep hanging on, stay on the war wagon because we have got more to take over.

Make sure to catch Shayna and all your favourite NXT Superstars every Wednesday night exclusively on The WWE Network www.wwenetwork.com.