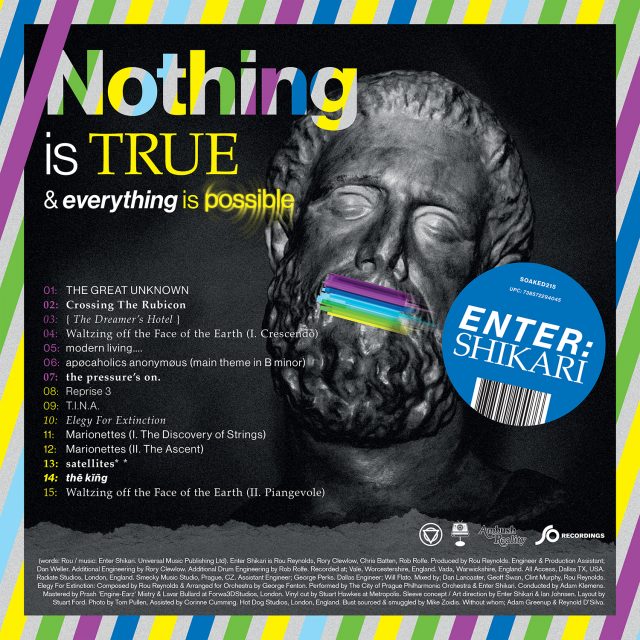 It will come as no surprise that there is an enormous amount of bloviating as to what constitutes heavy music in the alternative community. In the anonymised battlefield of the internet there is a lot of hot air expended as to whether something is heavier than its contemporaries, its predecessor and whether something is even metal. Fans of outsider music spend a ridiculous amount of time in-fighting rather than enjoying things based on merit; instead ranking ability and sonic battery as one and the same. A band often derided by the old guard of fans – basically the kind of layabout in a Saxon battle jacket who posts up in a deckchair to watch detritus of days gone by clog up the Download main stage – is the indefinable St Albans natives, Enter Shikari. Quite what the band are is debatable as there are elements of post-hardcore interwoven with dance club electronics alongside metal, pop, rock and acoustic balladry. With their debut album, Take To The Skies, Shikari blew a hole in mainstream metal’s conception of what heaviness, and more importantly what “acceptable” music could be. It proved divisive, naturally, and even now with their sixth album tantalisingly close to release they stand in a category of their own and get under the skin of those not willing to move beyond the limited parameters of NWOBHM or thrash. Enter Shikari are a band that have the capacity to be heavy, but it’s not the be all and end all of the conversation if something can out bludgeon Godflesh’s Streetcleaner or Neurosis’ Through Siler In Blood. Much like those two albums, there are so many shades of interesting and revolutionary musicality that are a necessity to making great, long-lasting art. Based on Shikari’s consistency, longevity and seemingly unstoppable rise, they are a band in conversation with the forward-thinking stalwarts of the world of weighty music.

“Is this a new beginning or are we close to the end?” posits frontman and synthesiser maestro, Rou Reynolds, on THE GREAT UNKNOWN. Quite how far this is a new beginning for the band is questionable as Nothing Is True & Everything Is Possible doesn’t feel like a bold step into new frontiers, but instead an amalgamation of the various sides of Shikari’s multi-faceted career. What it assuredly isn’t is a band nearing the end of a respectable lifespan. This is an album that takes the swinging hammer of Take To The Skies, combines it with the quadrophonic auditory ability present on The Mindsweep and the overt pop sensibility of The Spark to coalesce into perhaps Shikari’s most daringly cohesive record to date. Combine the career-retrospective ambition with utterly sublime performances and execution that warrants serious praise and we might just be talking about the band’s best work to date.

{ The Dreamer’s Hotel } was the first taste fans got of the record and is a great glimpse into what to expect. The heavy, bleeding edge electronics present across Nothing Is True… juxtaposed with the nous for brain-infesting vocal hooks make every song on this fifteen-track LP a dynamic affair that never loses steam, nor does the record settle into a rut of peddling out the same old fare. Waltzing off the Face of the Earth (I. Crescendo) turns the album on its head four songs in as it takes the ballroom stomp of the 3/4 musical institution and interweaves the signature sound of St Albans’ finest to create something quite unlike anything in Shikari’s canon. The immediate comparison would be the oompah/heavy dichotomy of System of A Down’s Peephole. The quasi-rapped joyful nihilism of the ska-inflected modern living… followed by the modern hip hop flair of apocoholics anonymous (main theme in B minor) makes for another side-lining subversion of expectations. Across this album there are side swipes and punky inflections ala A Flash Flood Of Colour interspersed with the pop sensibilities of The Spark, and it makes for a damn-near perfect record.

Enter Shikari’s latest opus may well be the best thing they have released thus far. The album as a whole is built on concision and leanness with no song outstaying its welcome and feeling every bit as meticulously crafted as Shikari would want them to appear. Cohesive and ambitious, this album takes everything that has made the band an exciting proposition and condenses it into one record that is a definitive statement of intent. Hopefully – and if there is any justice – this will be the album that finally pushes them to the next bracket of financial success, bringing all the glories of bigger stage appearances and even more vast audiences. How much you enjoy this album will be dependent on your pre-existing enjoyment of the St Alban’s quartet’s music, but if you’re already in for a penny, this album will pound you into a ecstatic bliss.